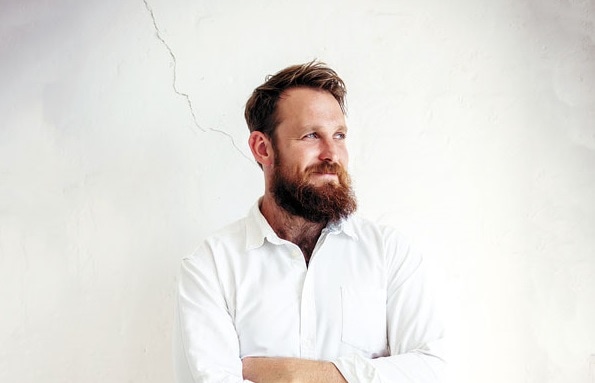 To Nourish is to Nurture by Krishna Everson

If you’re a lover of idyllic Australian countryside, fresh food and sustainable farming, then you’ve probably already caught an episode or two of ‘River Cottage Australia’, currently airing weeknights on SBS. Filmed on location in the southern coastal region of Central Tilba, NSW, ‘River Cottage Australia’ and host Paul West have inspired millions of viewers to aspire to a more sustainable lifestyle.

When I caught up with Paul, he was holidaying with his young family in Melbourne, after several seasons of television production and the relentless schedule that goes with it. With a new addition to the family, he was enjoying making precious time for family and fatherhood.

Paul never set out to be a celebrity chef, or sustainable farmer. It was only after a chance suggestion by a friend, and encouragement from his wife that he applied online for the coveted hosting role on the Australian version of ‘River Cottage’. The rest is history.

Paul first chose cooking as a potential career out of necessity. He needed employment, and felt a trade that allowed him to cook for family and friends three times a day in a home environment, would be a smart choice. “It was for both personal reasons and survival; I couldn’t really cook to save myself. When I left home I realised that mum had been cooking for us for two decades and I didn’t know how to do it!” Paul grew up on a diet of meat and three vege, so his culinary adventures were yet to come. With such humble beginnings, I was curious to uncover what had led him to embrace growing food, and the concept of sustainable farming.

Paul believes that growing and cooking food are fundamentally tied. “It first really clicked that I wanted to cook, and I wanted to grow food, when I was staying on a farm as a wwoofer.” WWOOF is an international movement that connects willing workers with organic farmers, exchanging food and accommodation for a working contribution to the farm. At 21 years old, Paul was offered a place on an organic farm in Northern Tasmania. “I stayed with this old French guy. He had a very River Cottagey type farm, he’d grown up in the South of France, and he was a carpenter. He’d moved to Australia in his twenties, and had never left. He was kind of retirement age, and was really going about re-creating the life in Southern France for himself in the North of Tasmania. He had 20 acres, with beautiful stone walls, vegetable gardens, horses, geese, ducks, pigs, cows, hand-dug wells, stone-lined cellars and all this amazing, amazing stuff, and I’d never really been exposed to that before. I grew up in a regional area in the Upper Hunter Valley, but it was not that type of farm. As I was living and exchanging with this guy, I didn’t even think this type of thing was real, it was kind of like fairy tale stuff, where you have all these kind of different animals on the farm, and you work in the sunshine, and you cook from the land, and all the neighbours drop in, but it was real!

“I guess it’s only since I’ve been in the position where I am now, and people ask me about where it all began in retrospect, what an impact it had being on that farm. I realised by being there, there’s a real synchronicity between cooking and growing, and the two are really inseparable. If you grow it, you’re going to cook it! So, if you can do both, then it’s a wonderful dual skill set to have. So I’d realised I had none of the skills to do either of those, I wasn’t much of a gardener either. I mean my mum was an excellent gardener, she had a huge mainly ornamental garden she’d carved out of a bare paddock and turned it into this lush oasis. So for me, every school holidays was basically spent moving a tonne of mulch with a wheelbarrow and a shovel, which was like punishment when I should have been enjoying my school holidays with my friends. At the time I couldn’t think of anything worse than gardening!

“I’d like to think that the trajectory that my career has taken as a cook would serve as an inspiration that nearly anyone can cook. It doesn’t have to be in your blood. It was certainly learned for me.”

If Paul was to send a message to Australians, it would be that our nourishment shouldn’t be taken lightly. “It’s probably one of the highest priorities we have. Getting truly nutrient dense food, is not about being a good cook; it’s not about being a MasterChef contestant or being a foodie or taking photos of every meal and putting it on social media. It’s about cooking, and taking high quality ingredients and turning it into something that nourishes yourself and your family and friends. That’s the epitome, it’s an act of self-love, and not something we should be doing for recognition. To get really good, beautiful, nutrient dense food, it can’t be grown in a big industrial manner, it needs to be grown by someone who cares and someone who loves what they do and that then comes through in the quality of the food. Once I learned to cook, it gave me a deeper appreciation for the ingredients. You don’t need to do a great deal to have a tasty dish, whereas if you use really bad ingredients or use things that are right out of season or meat that has led a miserable life, it’s hard to make that taste good, even for a chef.”

Paul is the first to admit that everyone has different constraints and pressures, and that it won’t always be easy to change the way we currently access and consume food overnight, but he does suggest we can make small adjustments when and where we can. “Rather than eating a lot of meat, eat a little bit of high quality meat that relies on grass, outside in the sun, that’s been grown by someone that has respect for the animal. What you’re really buying is nutrition, and an animal that has good nutrition.”

Life after River Cottage means Paul will be back home in Newcastle and can focus on growing his own fruit and vegetables, which he hopes to document online. “What I found with my experience with River Cottage is that a lot of people found it very aspirational, but not a lot of people found it practical. They don’t live on 20 acres. They’d love to, but in reality they live in a suburban environment, so by growing food myself in the backyard and coming from that River Cottage farm and that mindset, I can show people that you don’t need to live on 20 acres in the Tilba or a beautiful property in Northern Tasmania to be able to access good food. You can grow a relationship with your food and the people around you, and can do it anywhere.”

“Love is a state of being without fear, that operates for the highest good of all in every moment.” -Virginia Robin In a legal system that is mostly based on fear but portrayed as bringing peace and good order, Virginia...