Arriving into the World Peacefully by Michell Mercer

It was 1990, I was living in the bush on a community and my friend Jenny and I, with our kids; two of hers, two of mine, decided we were ready for a sea-change and lucky for us Byron Bay was the nearest beach. It was still a little hippy town then but was about to explode into the tourist mecca it is today.

I was in a relationship at the time but we weren’t living together, and then surprise!!!  I found out I was pregnant. We decided to explore having a natural home birth and it turns out we were in the right place. Byron was home birth city. There was a pregnancy group, a parenting group and a midwife smorgasbord to choose from. We found the perfect person for us (Debbie), we then relaxed and enjoyed the next few months.

As “B day” approached, we converted the family room into our very own birthing suite. The huge tub was delivered (more like a mini pool) and we began to work out the logistics of filing it and more importantly emptying it.

My labour started at 10.30pm, we were watching a video called, ‘Driving Miss Daisy’, it was nearly the end of the movie so I didn’t say anything until I was sure it was the real deal.

We began filling the tub and by the time there was enough water in it, I was well and truly ready to get in. Oh… blessed relief. The water was so soothing and took away the slight panic I was starting to feel as I remembered how intense it is to give birth, mmm a bit late to back out now.

Debbie arrived as I was rolling around in the water like a dolphin. I’d watched a video of how they give birth and rock their body side to side to help the baby move down the birth canal, I thought if it worked for them, I was going to give it a go.

At about 5am, I moved into the second stage of labour, my partner was in the water with me now. The kids wanted to be there for the birth, so we woke them just before it happened and they all came in to watch. This proved to be very effective birth control during the teenage years.

Soon the baby’s head was crowning, I reached down and felt it, I was bursting with every emotion possible, in total awe, I knew it wouldn’t be long until I would be holding my baby. Pushing, panting, resting, over and over. It was such an intense experience, I felt like I was in a bubble that no one could enter, my body knew exactly what to do and was doing it.

I reached down and helped my baby into the world. Born into the water, no bright lights, no noise, the silence is beautiful. I’m slowly coming back into being aware of my surroundings when Debbie asked me if I wanted to get my baby, she was just floating around in the water (babies are born with the reflex that prevents them from breathing when they are born into water).

I reached down and lifted her up to my breast and she took her first breath, a little sigh, so soft, so sweet, so very content.

Giving birth at home, in water, was one of the most empowering and amazing experiences of my life. I just knew in every cell of my body, that I could do it without intervention, in a gentle way that allowed my baby to enter the world into a peaceful loving environment. 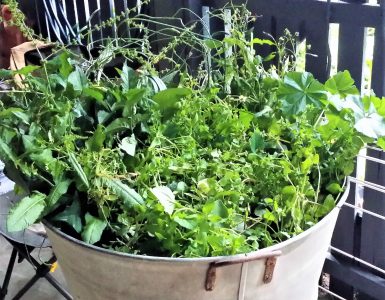 Saving My Weeds By Kate Wall

There is a thug in my garden and it has to go. It’s a pretty groundcover I planted years ago and it’s now smothering far more valuable plants. It has done that most terrible of things, it has invaded my weed patch. This...