Sandra Meehan and Rebecca Bowden: Connecting is Out of This World by Krishna Everson

As we celebrate Mother’s Day month, we are also witnessing a time of healing for Mother Earth. As our planet heals, so can we. This month we caught up with mother-daughter duo Sandra Meehan and Rebecca Bowden, global leaders in women’s empowerment, lightworkers, and spiritual entrepreneurs.

Sandra and Rebecca co-founded The PowerFULL You, where they provide transformational products and programs, merging the physical and spiritual realms. I have known of Sandra’s healing work for around 10 years, but I first came across their work together as a team some 12 months ago after they launched their live light language broadcasts on Facebook. Utilising channelled codes of light images, combined with Rebecca’s gift of light language, they shared messages with viewers who tuned into the program. These codes also adorn the world’s first codes of light yoga mat, which is being distributed across the globe.

It’s been a whirlwind year for the pair. Sandra and Rebecca have further developed The PowerFULL You offerings while supporting individuals and other global changemakers, and their business has grown exponentially.
But it hasn’t always been smooth sailing. They’ve had their share of life’s challenges, both as individuals, and as mother and daughter. Like most relationships, it has been quite a journey to arrive where they are today.
Sandra had a challenging childhood as an adoptee, and a difficult upbringing left her yearning for a daughter of her own. But when Rebecca was small, Sandra mothered the only way she knew how due to the baggage she carried from her own experience. “I was a bit of a tough-love mother. Because that’s how I was sort of mothered. I came down so hard on Rebecca because I expected more from her as she was the oldest, but what I actually was doing was pushing her away.”

This led to a period of estrangement when Rebecca did not talk to Sandra at all. But during that time, a great deal of healing took place. Sandra explains, “I had to heal myself and my own baggage around self-love and self-worth, then be able to open up and have that connection. I did it because I wanted a relationship with her. The three years when Rebecca wouldn’t talk to me, I never gave up. I’d pick the phone up every day. I rang her, and she wouldn’t talk to me. That’s okay. As the adult, I’d played the bigger role as a mother, and it was my responsibility to build that connection.”

After Sandra’s business partner passed away, a window opened for mother and daughter to reconnect. Although they were still emotionally distant at the time, Rebecca moved back to Queensland with a desire to pursue a relationship with her mother. It was then, when Rebecca attended one of Sandra’s meditation events, that her gift of channelling light codes and subsequently light language was activated. Trust and honesty became the foundation of their relationship moving forward. They began to realise it was important to back each other.

The pair believe they have a past lives history together, and that this life is part of a soul contract. Sandra explains, “We know there’s a contract that we’ve come here to do as two souls as mother and daughter. And we’ve never been able to get to the point where we are now. And that’s what makes it special. It comes down to trust. I didn’t trust Rebecca, she didn’t trust me. I’d always let her down. She’d let me down. And I think where it came to, if I’m actually honest, is it came to the point where she could trust me.”

Rebecca recognises that her mother’s journey is no reflection of who she is as a person and they each have their own journey. “It’s being able to have that pure adult relationship with somebody who is a mentor and a mother, as well as a mentor and best friend. Having that adult conversation, being able to talk to somebody who knows you so well that you can talk about anything. And having no judgment and no bias around what’s actually being talked about, as well as helping you to understand things in other ways, woman to woman.”

Both agree it is honesty that makes the mother-daughter relationship so special, and looking beyond the ‘mother’ and ‘daughter’ labels that carry so much expectation, to being more about an adult relationship between two women.

Rebecca says, “Just knowing that whatever happens in that relationship, you are enough. If your mother doesn’t want to change, it’s up to you to go, okay, I’m enough, which I am. That’s who she is.” Sandra adds, “We search for a mother’s approval because it’s not there, but a mother sometimes can’t give it to us because they never had it and we always want something from outside ourselves. I guess for us, the greatest thing we did for our business moving forward was to heal this mother-daughter wound and to stop it, because now we’re both rock-solid in who we are as individuals.”

Healing their relationship has meant they can be honest with each other without expectation. Rebecca explains, “We’ve learned to trust each other and ask the raw and real questions between the two of us and not be afraid to hear what the other person actually has to say about it.” Sandra adds, “and even if Rebecca never wanted to have a relationship with me, it was worth doing my stuff because my journey is my journey. But what we’ve done now that we’ve healed whatever it is that we’ve healed between us, no other female in our lineage will ever come into this planet with the baggage we both came in with. My desire for every woman on this planet would be to have the relationship that we have together. I didn’t have that with my own mother, but that’s okay because that’s her stuff. And the moment I let go of wanting to have that relationship, it opened up the opportunity for me to then nurture my own relationship with my own daughter.”

Rebecca concludes, “I would say have a look at your own values around stuff like your own self-worth, self-love and self-confidence. If we can clear that, whatever somebody else does, even if it’s your mother or another woman, you have that power within yourself to say, okay, I am not that, this doesn’t fit me anymore.”

As 2020 continues to unfold in new and unexpected ways, Sandra and Rebecca have more work to do and are getting on with doing it. Rebecca continues to host her weekly light language broadcasts with some creative projects in the pipeline, and Sandra is rolling out a series of The PowerFULL You programs. There is no stopping this dynamic duo. Stay tuned for the next chapter.

Sandra Meehan and Rebecca Bowden are a mother daughter duo and the creators of The PowerFULL You, and coach business women and female entrepreneurs to break through their limited mindset and rock their visibility from the inside out. You don’t need someone’s permission to grow, evolve or change by Shveta

We grow and change as life unfolds mysteriously. Each experience brings us closer to our authentic version. Each experience is an opportunity to choose our truth. And then life unravels in such a way that we feel as if... 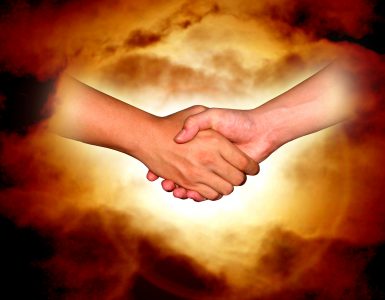 Integrity Around Finances by Abbey Rose

Having integrity around your finances goes both ways as a payer and receiver. Are you a business owner who has compassion and understanding when someone falls on hard times and can’t pay you right away, or does it...

The Spirituality of Corona by Linda Willow Roberts