Have you struggled to lose weight and keep it off over the years? Internationally acclaimed researcher and ketogenic expert, Deborah Murtagh from New Zealand, has facilitated countless women all over the world to be empowered and create a new life with her famous Ketogenic Switch program.

Deborah has lived experience with body image and weight issues. “I was dragged off to Weight Watchers at 13 years of age. And it’s part of why I became an international women’s weight loss coach,” she said. Her early experiences were a catalyst for change and, in turn, she has become an inspiration for others.

Deborah’s journey with the ketogenic diet began 25 years ago when she started studying the principles of nutritional ketosis, which had been around for over 100 years. Ketosis is when your body starts burning fat instead of carbohydrates, and she started using these principles in her clinic, working with women who were trying to lose weight. But it wasn’t until her middle daughter was born in January 2000, suffering from food intolerances and petit mal seizures in her highchair while eating at 10 months old that Deborah really searched for solutions. That’s when she ramped up her research, discovering positive links between ketogenic living and epilepsy management in children. “That’s how I become an expert in nutritional ketosis, I was one of those obsessed mothers. Gluten and homogenised dairy were also having an impact on my daughter’s brain and health.”

Today, Deborah and her three beautiful daughters are fit and healthy, and her unique ketogenic diet is her much-touted secret tool to her abundant energy to run her eight companies – and find the time to conduct research as an unpaid volunteer. This ketogenic research is ground-breaking with positive implications for not only weight loss but also for people with Parkinson’s disease, Alzheimer’s disease and many other health conditions. “We are seeing women reverse diabetes, fatty liver and have dramatic health improvements,” she shared.

Deborah has personally adopted a ketogenic diet for over 17 years now. She says she cycles in and out, eating carbs once a week. Although, 70-80% of the time being in ketosis is her preferred state and she can’t imagine living any other way. That’s also the feedback from tens of thousands of people she has coached over the years.

“Once you experience what it feels like to have your body in nutritional ketosis, you never want to go back. And when you begin, you get to day four and you feel like the curtains have been drawn, the veil has lifted, the mental fog has gone, you have exponential energy, and you’re not hungry – the hunger hormone, ghrelin, shuts down. You are left with constructive hunger, which is about eating when you are actually hungry to fuel the body. It’s a very successful, appropriate and easy way to lose and regulate weight. People feel better and sleep better,” she shared.

What happens over time (after 3-6 months of going keto) is people become fat-adapted and the body is retrained to prefer ketones. What happens at that point is their carbohydrate tolerance increases over time, and that is a huge benefit. The mitochondria in the cells increases, and the more we have, the healthier, more vibrant and youthful we are. When nutritional ketosis is combined with intermittent fasting, we can further enhance health and optimise brain function.

This may be why the keto diet has received much global attention in recent years, but there are also many myths about it too. “Not all keto diets are created equal,” Deborah said. “I prefer to call it ketogenic not keto; keto often gets a bad rap because some people think it’s about high fat and eating large amounts of bacon. My program is one of the lowest fat ketogenic diets out there. Babies are born in nutritional ketosis; breast milk is ketogenic. Why did nature design us this way? It’s the way we were meant to be fuelled. Nutritional ketosis is a tool that is valuable for us.”

The standard, modern supermarket diet has a high percentage of processed foods and carbohydrates. When we have too much glucose in the body, insulin will convert the excess glucose into fat for later use. This was fine when we were living in times of famine, but there isn’t famine like our ancestors experienced and more people are becoming insulin resistant. “We are experiencing feast and feast and as a result, obesity is a plague of our time. Glucose is like burning old, dirty lead petrol, whereas with ketones you become a hybrid, twin fuel engine. Switching to ketosis is like a clean and green burning fuel. Your body will still utilise some glucose, and it will always have enough glucose to fuel the cells that are important. But ketone bodies don’t require insulin to be transported inside the cells,” she said.

So what role do the emotional, spiritual and mindset factors play when it comes to weight management? Deborah looks at the whole picture, including diet, and shares her comprehensive insights. “You can have the best diet in the world, which I believe my protocol is, but all of that goes out the window if people are self-sabotaging, if they are ‘eating their stress’ and ‘eating their grief’, if they are lonely and their needs aren’t being met, or they feel unsafe, they will turn to food for comfort.”

Deborah believes mindset is everything with all aspects of our life, and she brings an holistic approach to everything she does. She has also learnt how to grow stronger through adversity after having many personal challenges, including her now ex-husband going bankrupt about nine years ago and being unofficially bankrupt herself for six years, and losing two homes in earthquakes. She says what changed her life was changing her mindset. Now, her life is about practising gratitude and staying in the flow. “I teach people how to increase emotional intelligence, how to step into the ‘observer’ so that people are more observant of emotions rather than allowing the e-motion (energy in motion) to override them. I teach how to transcend the ego, which bridges towards spirituality. We have women of all religions and faiths within my program, so everyone can be a part of what I teach, and the common thread is having a belief system that there is a higher power and purpose to our lives.”

Deborah runs spiritual retreats around the world called the Soul Switch Program, which focuses on shifting consciousness and transcending ‘problems’. “It’s about aligning with the vibrational frequency of love, which has the ability to heal people, connections, the body, and the immune system. We know from epigenetic research what overrides our genetic expression and controls our immune system is our consciousness and our belief systems.” That’s why people often go into spontaneous remission – it’s a shift in consciousness that has taken place.

“I cry tears of joy when I see people breaking through their barriers.” And with tears of gratitude, Deborah shared with me, “I feel like I have the best job in the world. And I don’t own it – this work would have been born whether it was me or someone else. It’s all about me getting out of the way and allowing spirit to do its work.”

Deborah has seen what an impact her closed Facebook groups have had on the community. She has utilised the principles of psychology: that we are here to fulfil each other’s needs. Check it out at https://www.facebook.com/DeborahMurtaghTKS

She is also involved with filming a documentary around some new inventions for having premium, cold-pressed coconut oil. The ripple effect will be improved health care and education in overseas communities and protecting endangered species. Stay tuned on her Facebook page for more details soon. 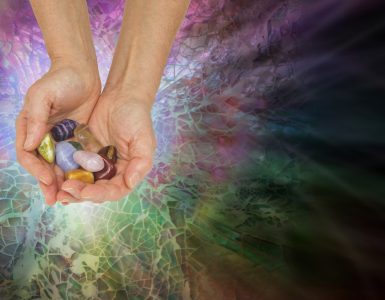 If you’re feeling stressed, the answer to finding inner calm could be hanging right in front of you. Many of us buy art to simply adorn our walls but, while this does positively enhance our living environment, using it...

Evolving into the Future by Delany Delaney